Namsor provides a a name translator and a specialized name processing technology dedicated to analyzing names in the Japanese language.

Transcribe a Japanese first name, a Japanese surname, or both for more precision, written in Kanji characters, in English with Latin alphabets.

What is the romanization of a Japanese name written in Kanji

The translation or conversion of a Japanese name written in Kanji into Latin alphabet is called romanization. Several transcriptions for the same name are possible. This is why we return a list of transcribed names, accompanied by a calibrated probability and sorted from most likely to least likely.

Transcribe a Japanese first name and/or surname, written in Latin alphabets into Kanji characters. Indicate the most likely gender to improve the accuracy of the transcription.

The name transcription will work with greater accuracy for names identified as Japanese.

What is the translation of a Japanese name into Kanji characters

Several conversions for the same name are possible. This is why we return a list of converted names, accompanied by a calibrated probability and sorted from most likely to least likely.

Rate a transcription from a Japanese first name and/or a Japanese surname in Latin characters to a Japanese full name in Kanji.

Identify the gender based on a Japanese first name, last name or full name

Analyzes a Japanese first name and optional surname, or an unsplit Japanese full name, in Kanji characters or Latin alphabet, to identify the most likely gender with higher accuracy. If the first name and surname are clearly identifiable, the Genderize Japanese Name feature (FIRST & LAST NAME) will be slightly more accurate.

What is the gender of a Japanese name

Gender is defined as a set of characteristics considered to relate to femininity and masculinity. Depending on some contexts, this may include social structures based on gender identity and sex. Most cultures use a gender binary, in which gender is divided into two categories: boys/men/male and girls/women/female.

The gender estimated from a name is not absolute, so we indicate the probability that the identified gender is correct. Adding a surname and/or country of residence significantly increases accuracy. If the probability of the returned gender is between 45% and 55%, the name can be interpreted as unisex.

For example, the Japanese full name written in Kanji 中松 義郎 is identified as a male name with a probability of 55.01% (can be interpreted as unisex). 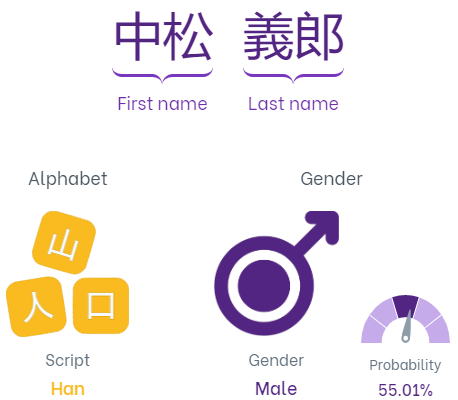 Separate an unsplit Japanese full name, written in Kanji characters or in Latin alphabet, into a first name and surname structure, with higher accuracy.

For example, for the unsplit Japanese name in Kanji 中松 義郎, the first name is 中松 and 義郎 the last name. 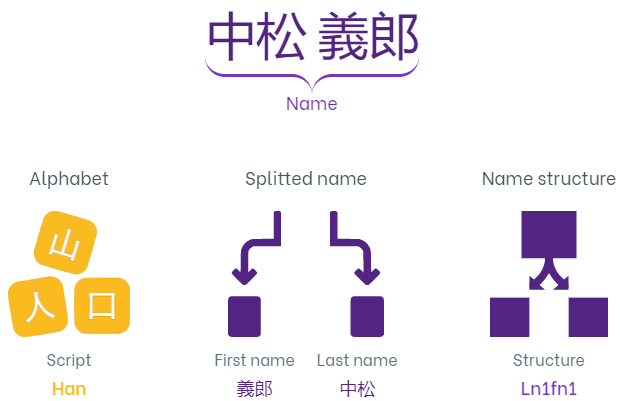