Namsor provides dedicated name analysis technology for the processing of Chinese names. Our name recognition AI can translate Chinese names to English (Pinyin). Among other features you can: infer the gender of a Chinese name or split a Chinese full name into a first name and a last name. We are also able to rate the quality of a transcriptions between a name in Pinyin and a name in Standard Mandarin Chinese.

The name transcription in Pinyin will only work with a Chinese full name (last name and first name).

What is the translation of a Chinese name in Pinyin

A Chinese name written in Mandarin translated into Pinyin is the conversion of this name in English (written in Latin alphabet).

Pinyin is the official romanization system for Standard Mandarin Chinese. It is used to depict Mandarin logograms with the Latin alphabet, used by languages such as English.

Standard Mandarin Chinese is the official language of China and a major language in Singapore and Taiwan. It is also one of the six official languages of the the United Nations. It uses a logographic system called Hanzi that is more commonly know as Chinese characters. 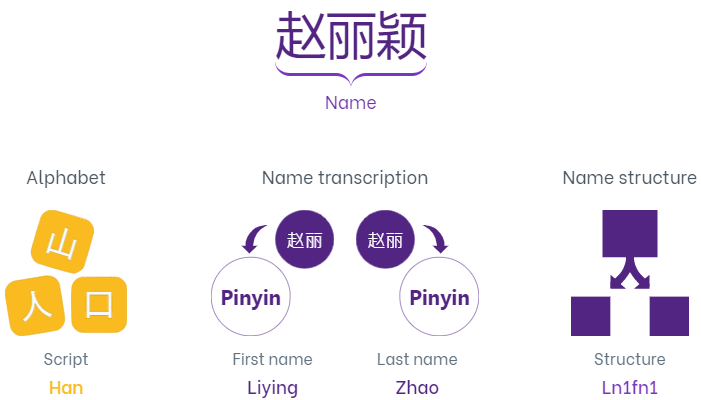 Transcribe a Chinese first name and/or last name, written in Latin alphabets (Pinyin) into Standard Mandarin Chinese. Indicate the most likely gender to improve the accuracy of the transcription.

Mandarin name transcription will only work with first and last names identified as Chinese.

What is the translation of a Chinese name into Mandarin

Several conversions for the same name are possible. This is why we return a list of converted names, accompanied by a calibrated probability and sorted from most likely to least likely.

Rate a transcription from a Chinese first name and/or a Chinese last name in Pinyin (Latin characters) to a Chinese full name in standard Mandarin Chinese.

Identify the gender based on a Chinese first name, last name or full name

Analyzes a Chinese first name and optional last name, or an unsplit Chinese full name, in standard Mandarin Chinese or in Latin alphabet (Pinyin), to identify the most likely gender with higher accuracy. If the first and last names are clearly identifiable, the Genderize Chinese Name feature (FIRST & LAST NAME) will be slightly more accurate.

What is the gender of a Chinese name

Gender is defined as a set of characteristics considered to relate to femininity and masculinity. Depending on some contexts, this may include social structures based on gender identity and sex. Most cultures use a gender binary, in which gender is divided into two categories: boys/men/male and girls/women/female.

The gender estimated from a name is not absolute, so we indicate the probability that the identified gender is correct. Adding a surname and/or country of residence significantly increases accuracy. If the probability of the returned gender is between 45% and 55%, the name can be interpreted as gender neutral.

For example, the Chinese full name written in standard Mandarin Chinese 谢晓亮 is identified as a male name with a probability of 53.29% and can therefore be considered a unisex. 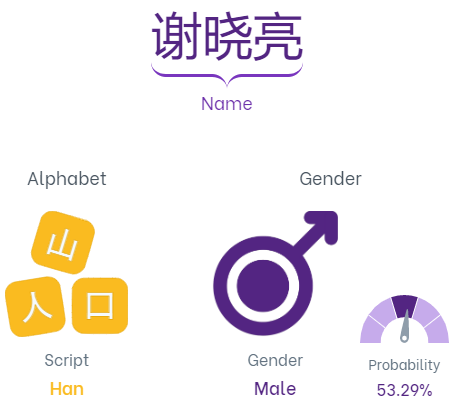 A first name is the part of a personal name that identifies a person and differentiates them from other members of a group. It is also called a given name. The first name may also include middles names.

A last name is the part of a personal name that usually indicates a person's family, tribe or community. It is also called surname or family name.

For example, for the unsplit Chinese name in standard Mandarin Chinese 谢晓亮, the first name is 晓亮 and 谢 the last name. 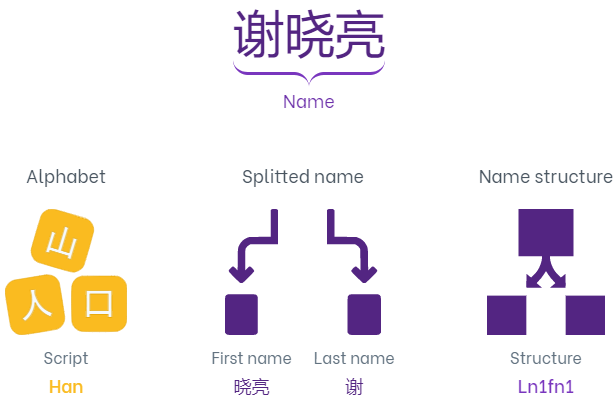